By Mark Holder - January 12, 2012
After trading down 2% in after hours due to a warning from competitor Big 5 Sports (BGFV), Dicks Sporting Goods (DKS) is up 11% now based on the announcement of a $200M stock buyback and reiterating of Q4 guidance.

It appears that most market participants were expecting at the least a earnings miss. Instead they got a big buyback to support the stock price. This is what happens when investors focus too much on the weak competition. Difficult to extrapolate too much especially when it's just a regional player as well.

DKS did lower the upper guidance by $0.01, but that wasn't a shock. Comps are now expected to be flat versus the original expectation of slightly up.

The buyback is interesting as I don't see DKS stock as incredibly cheap, but the company is one of the few retailers that has the cash on hand.


With this news the stock is back over $40 and approaching the $41 closing highs from back in mid November. The gap is concerning, but many stocks lately are forming gaps and not filling them. At least not immediately. See Liz Claiborne (LIZ). 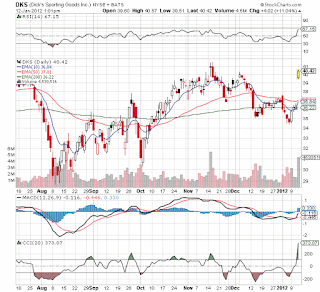