Japan Industrial Production to Roar Back

By Mark Holder - June 01, 2011
As world economies limp through weak data over the last two months, the market needs to look no further then Japan. After the March 11th earthquake and tsunami, industrial production plunged 15.5%. In April, it only bounced back 1%. While better then a decline, it was still a anemic rebound considering the huge plunge. Clearly signals of the short term impact to the global economy.

The good news though is that companies in Japan expect a major recovery in May and June. The May industrial production number is expected to soar by 8% and June up over 7.7%. Nearly back to the pre quake levels at that point.

These numbers seem to match up with the price of copper. Dr. Copper has rebounded recently after a weak couple of months. Before bottoming in early May, many analysts were expecting copper to swoon much lower after breaking $4/lb. As originally thought back after the destruction in Japan, copper could finally see the higher demand as Japan undergoes major reconstruction plans. Unfortunately the nuclear meltdown pushed the initial recovery back maybe a month or two partly contributing to the weak global manufacturing numbers.

See below chart showing how copper snapped back from what appeared to be a technical breakdown. 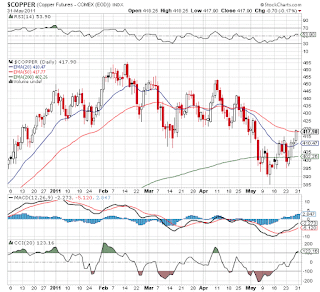 Now though investors are looking backwards at past data and apparently imperious of the disaster that took place in March and continued through April and into early May. Clearly the lag in reporting the data has investors misguided on the reasoning. Naturally the damage occurred in March so a report released on June 1st lacks the connection within the market mindset.

Sure the China PMI has been weak as the government has attempted a slowdown and the US ISM numbers had huge drops, but was it really anything but a temporary blip from the Japan disaster? Bespoke has a couple of interesting graphs showing how initial claims and ISM numbers were hit immediately after the Kobi quake as well backing up the concept that any current declines will be as temporarily as back in 1995. 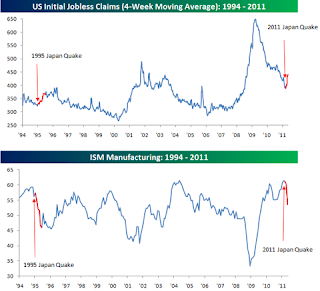 Claims have already started backing off as the real time report shows evidence of an improving market as May ended while the ISM could likely rebound in June. The claims report tomorrow will be interesting as it could highlight further increases in demand from the Japan production rebound or point to further weakness in the global economy.

In our view, the sell off today and any further weakness is drastically over done. The economy faces very little risk with huge liquidity in the markets and a still very positive yield curve. The fears from QE2 ending have to almost be laughed at considering the Fed is doing nothing more than stopping the purchase of an increased amount of assets. At this time, they still have extremely low interest rates and will be reinvesting paid off principal amounts. Hardly a reduction of a lose monetary policy. Stocks remain extremely attractive.
Industrial Production Japan Market Ramblings