China Jumps 2%, US Market Looks in the Wrong Direction

By Mark Holder - June 24, 2011
Still amuses us that the market is more focused with Greece than China and/or Japan. China is the number 2 economy and it's stock market has slumped since mid April with fears of rate tightening caused by inflation. With the significant drop in oil prices over the last few months, those inflation fears are starting to subside.

Japan recently dropped to the number 3 economy and was devastated with the March earthquake and tsunami. The combination of which sent industrial production down some 15%. Production is expected come close to the February levels in June.

Instead of looking at Japan coming back online and China beginning to push back to growth mode, the SP500 is slumping for what would be an 8th straight week  if not for a minuscule gain last week. What is concerning the markets the debt problems in Europe and more specifically Greece. Yet, both the EU and IMF have pledged to ensure that Greece doesn't fail and cause and collapse of the financial markets in Europe.

With the Lehman Brothers collapse fresh on everybody's minds, the leaders just aren't going to allow it to happen. Yet the market continues to fret over such a collapse driving risk assets down in many cases as much as 30%. They should be set to rally possibly next week and likely a major summer rally in July. The Greece issue should be resolved next week and all indications are that earnings will remain strong.

Back to China. The Shanghai Index jumped 2.16% today placing it back to mid-May levels. Another similar jump and the market could quickly retake the 200ema and move into a very positive stance. The China market has been flat to down for 2 years now even though their economy has grown some 10% a year. China is ripe for a major rally and a halt in interest rate hikes could just be the signal for the rally.

Next week watch the China market and the Japan recovery for clues on global growth and ignore all the news on a Greece bailout that has already been worked out behind closed doors. 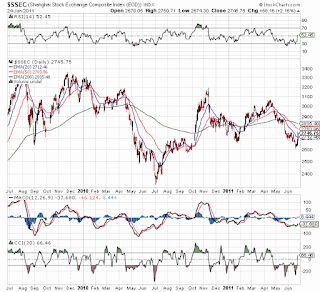