By Mark Holder - March 01, 2011
Don't look now, but the China markets have been heating up the last 40 days. After a significant selloff following the highs back you November, the market had completely left China for the dead. That was clearly the wrong move.

Lately it appears that China has been able to slow down its economy with PMI reporting the lowest total in the last 6 months over night.

The Shanghai Composite is on the verge of  a significant breakout if 2,950 can be broken soon. A run back at the 3,150 high made back in November is the likely target. So while financial professionals are overly focused on the US markets and the Middle East, the lack of focus on the economy that leads the world these days has taken off.

In that regard, our investments in China commodity plays like Puda Coal (PUDA) and Lihua International (LIWA) should perform well. Also, the recent purchase of ChinaCache (CCIH) appears ultimately timely a few weeks back. At the time CCIH was trading in very oversold levels, since the stock has bounced nicely from $17 to $21 and is looking even more attractive with China as a whole looking impressive. 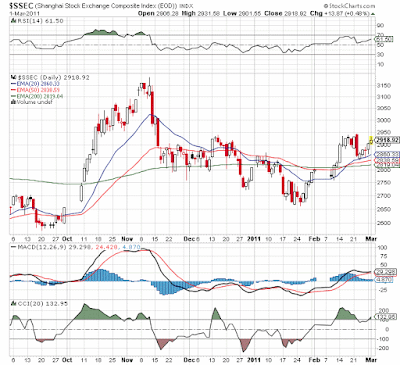 1/2/19 Update  Camping World announced a major reorg including the hiring of a new CFO. The sudden resignation of the President of RV Operations looks more and more like a personal decision due to a disagreement with the organizational shifts and his new place in the business. The stock is up about 5% to $12. Considering these reorgs usually occur when business is struggling, the recommendation isn't to jump into the stock on the rip. Continue to use dips to buy Camping World for the long term as 2019 could be another rough year. Original Article   The last thing a weak stock needs is an executive departure. Camping World (CWH) is crashing to new lows based on the surprise resignation of the President of RV Operations. One of the reasons to invest in Camping World was the solid management team lead by CEO Marcus Lemonis and other executives like Roger Nuttall with decades of experience in the industry. Naturally, the market is worried by a surprise move on a Friday even
Read more