By Mark Holder - March 29, 2011
Interesting news after the bell today on Cephalon (CEPH). Valeant Pharma (VRX) went public with a $73 all cash offer to buy CEPH. The deal would be valued at $5.7B and represents a roughly 25% premium from the closing price. Naturally VRX claims a 29% increase from the 30 day trading average, but going back the last year CEPH recently traded at 52 week lows. Shareholders are likely happy to see an offer with the stock swooning of late, but anybody holding the stock for most of the year sure expected a higher valuation and isn't exactly happy.

The claims by VRX are normal of hostile bids suggesting that the management of CEPH has done everything to prevent this deal even going so far as to make several acquisitions themselves in order to block the deal. Possibly valid, but this isn't a scorching high valuation.

CEPH is a key holding in our Opportunistic funds, but honestly the investment has been slightly disappointing having a loss on the investment until this announcement. CEPH has consistently smashed earnings estimates the last year having beaten estimates by 15% on average (per Yahoo Finance Analyst Estimates), but investors remain hesitant to invest in a company about to have a key drug roll off patent.

For long term investors willing to hold for 3-5 years the deal likely isn't appealing, but anybody wanting a quick gain will jump on the offer especially if the stock trades at a premium tomorrow. My concern in holding the stock as a opportunistic investor not looking to trade every 10% gain is that the management team could turn down the offer and leave investors not seeing prices this high again in 2011. Hard to hold, turn down this offer, and start 2012 with less money. The VRX comment about finding additional value has appeal. Bring the offer up to $77-80 and I think most investors would be satisfied. 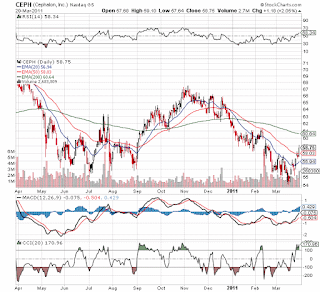 Disclosure: Stone Fox Capital owns CEPH for client and personal accounts. SFC could sell those shares in the next few days based on the stock price reaching or exceeding the offer price. This is in no way advice on how to handle your personal investments and should just be used for information basis. Please review disclaimer page.
Biotech stocks Buyout CEPH Cephalon Valeant Pharma VRX