By Mark Holder - December 03, 2010
Limelight Networks (LLNW) has garnered a lot of attention lately as the Content Distribution Network (CDN) providers have been front and center in the media whether with the Netflix (NFLX) deal with Level 3 (LVLT) or the Comcast dispute with LVLT. Not to mention that the CDN sector is hot based on higher demands for data on internet whether via streaming videos from NFLX, mobile video or cloud storage.

LLNW grabbed our attention because they are a relatively cheap tech stock in a hot sector. The major caveat being they are cheap based on revenue multiples but not so much based on profits. The key to stock gains will be whether they become a co-leader in the CDN market or remain a second fiddle to Akamai (AKAM). AKAM is the 800lb gorilla in this sector having a market cap some 13x the size of LLNW. Revenue is only 4-5x the expectations based on 2011 estimates. Their in lies the valuation proposal or trap depending on your point of view.

Tech has long had a history of 2nd tier companies being held on by the market just so that customers can use them as a neogotiating tool or backup plans. Its never wise to be completely reliant on one vendor and hence whether its Advanced Micro Devices (AMD) being the back up plan for computer chips to Intel (INTC) or numerous companies playing such a roll with Cisco (CSCO) those companies don't prosper. While INTC and CSCO reaped major profits, their competitors tended to stagnate and struggle to even make a profit. Typically these companies grab the scraps or the customers looking for the lowest cost provider. Hint, lowest cost providers don't typically make money in new fast growth areas.

Therefore, the recent expanded deal with Netflix (NFLX) and the deal with Groupon are very important to digest the income dynamics. LLNW's CEO has already clearly stated that customers like NFLX are loss leaders that allow them to build out the CDN network and provide an excellent service to smaller, profitable customers. So while those two recently deals were headline grabbers, they may not make shareholders money at least in the short term.

Based on results to date, LLNW is clearly playing the 2nd fiddle game to AKAM on profits. Having posted 50%+ year over year revenue growth in Q3, LLNW reported a much smaller EBITDA margin and non-GAAP income numbers were essentially flat. When revenue growth is this fast and profits don't materialize it likely means that the company is signing up customers at cut throat rates. Growth at all costs isn't a good long term plan. Obviously this trend needs to turn up as it did from Q2 to Q3. Still 14.2% EBITDA margins might have rebounded from the 13.2% in Q2, but that clearly wasn't high enough to report meaningful earnings.

Competing with LVLT isn't a good sign either. LVLT is likely one of the biggest examples of a company that competes on price causing the stock to struggle. They may have partnered with internet leader NFLX, but their stock trades below a buck now. With NFLX recently trading over $200, who do you think got the better end of the deal? LLNW clearly doesn't want to follow that path.

Still the market has huge promise and LLNW shows signs of gathering steam versus AKAM to potentially make a duopoly. LLNW is growing faster and nobody's interest is served best by letting AKAM dominate the market. This is clearly a buy and research stock as any signs of stagnation and worse yet deterioration on margins will be a signal to abandon ship. Like wise, if margin expansion returns then this could be a homerun stock.


Q3 Lowlights:
Technically LLNW provides a good entry bouncing along the 50ema and substantially below recent high all the way to $9 in early November. 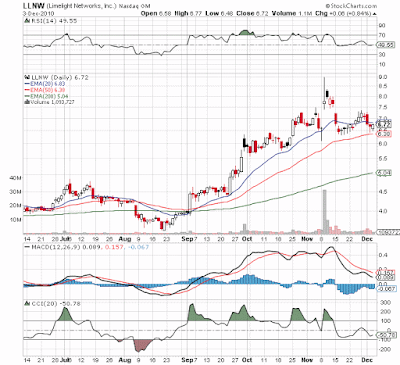