By Mark Holder - December 22, 2010
Back on November 16th, Stone Fox Cap added to its Regions Financial (RF) position when the stock swooned on the back of the departures of the Chief Risk Officer and others in the risk management area. The initial fear and typical of Wall Street was to be concerned that this was an indication that problem loans were escalating out of control and RF would be posting some horrible numbers.

While on the surface that might be a plausible thought, it just didn't pass the rigor test. RF had performed badly during the financial crisis caught with numerous bad loans in Georgia and Florida. So if the CRO hadn't prevented RF from avoiding the housing crisis, why was the market concerned when he left? If anything, it seemed long overdue.

Back in our article on the 16th [Trade:Added Regions Financial on Management Shakeup], we suggested that this was excellent news and hence bought more shares around $5.7. Management had followed up on the resignations that the BOD wanted them to leave due to poor performance. So why did the market panic?

On December 7th, Regions announced the hiring of KPMG managing partner for the CRO position. That helped solidify the position of management that the point of the resignations were to find new and hopefully better blood.

The stock eventually swooned down to around $5.2 in the next few days so Stone Fox clearly jumped the gun when buying. Currently though RF has jumped all the way back to $6.80s providing a solid 20% gain in just a month. Not bad considering missing the bottom by a good amount.

This case continues to highlight how the market over reacts to the downside a lot of times. Ignoring the headlines can be the best way to profit. Some of the gain might be due to the always rumored buyout potential and the recent deals by Canadian banks. For the most part, we ignore those headlines other then acknowledging that when the stock swoons the buyout potential provides a floor.

The stock has had a nice run since the November lows, but it still remains below the mid $7s that it routinely traded around during late summer. After having shook off on the weak hands, the stock is poised to make a run to those highs if not higher. As financials come back into favor, 2011 might be the year of regional banks so stay tuned to this story. 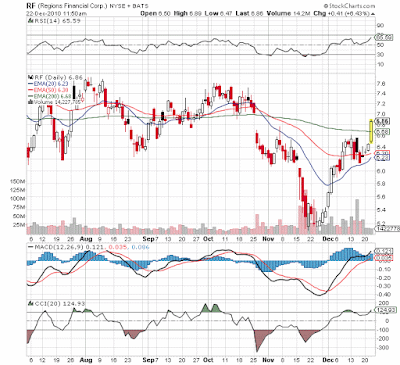