By Mark Holder - December 01, 2010
Anybody following this blog knows that Puda Coal (PUDA) has been one of our favorite stocks. PUDA was a small cap Chinese coal washing company trading at 4x estimates when we originally bought the stock. They are in the process of becoming a coal mine consolidator with numerous deals in the works. These consolidation deals provide huge upside for the stock, Read previous posts for more details on PUDA.

Today the stock has hit a high of $15.42 up some 9% easily hitting a new 52 week high and highs not seen in over 3 years. Why? Hard to tell why PUDA has chosen to take wings over the last month while the Chinese markets have swoon. Clearly it trades more based on US investor sentiment then Chinese market action.

The likely reason for the lift off is further awareness by the US media. Lately they've been included in reports by Investor's Business Daily, TheSteet.com, and Indie Research. Until recently PUDA flew under the radar rarely getting mention by such publications. Its possible that some news on the new mines has leaked, but its likely just higher investor knowledge leading to the strong buying.

Since the beginning of November volume has routinely hit over 1M shares. Prior trading volumes were lucky to get into the 200K level. This clearly shows that some institutions have become interested in the stock driving daily volumes much higher. Only 2 analysts list coverage of PUDA so its possible they are in the process of gaining further coverage.

Even with the jump into the $15s, PUDA only trades at 7x 2011 estimates. This for a company likely to expand earnings in the 20-30% range over the next 5 years making the stock incredibly cheap. 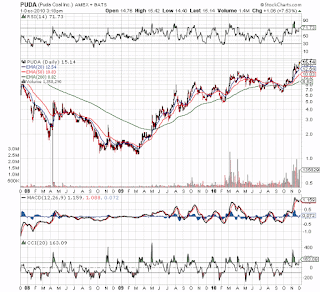