By Mark Holder - November 29, 2010
Added Limelight Networks (LLNW) to both the Opportunistic Long Only and Opportunistic Levered portfolios. LLNW is a play on a faster internet and the potential for being the next Akamai (AKAM). Unfortunately it could be the ugly sister in that competition and thats never good for a stock.

Some news today that triggered the move other then technical was the news that fast growing deal of the day company Groupon announced that they are using LLNW and have seen substantial improvement in their website speed. They also recently expanded an agreement with Netflix (NFLX). Both companies are at the leading edge of the web so its crucial that LLNW win these deals.

Though the question remains whether LLNW can start making money on all these deals. Thats where the ugly sister typically comes into place. Sure they'll get dates, but its usually when the pretty sister is too busy or too demanding. The stock will soar if any of these new deals start dropping to the bottom line.


Good interview with the CEO on Mad Money.


Bought around $7.03 today when the stock was hanging nicely above the 20ema. Appears that it wants to run and challenge the recent highs. Short term could depend on what they do with the recent $150M offering filing. 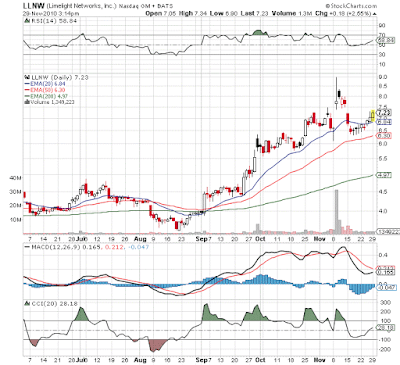