Starting to Look A Lot Like Christmas at Massey Energy

By Mark Holder - November 15, 2010
More reports over the weekend of companies lining up to bid on Massey Energy (MEE). MEE has reportedly been on the auction block for a month now with rampart reports from Alpha Natural Resources (ANR) buying the company to Coal India buying a mine. Neither make much sense considering the size of ANR and lack of benefit to MEE from selling just one mine.

MEE has been struggling under higher scrutiny and regulation since the explosion at the Upper Big Branch (UBB) mine back in April. The benefit to suitors is that MEE has the largest reserves of met coal needed for the production of steel in the US. With reserves of roughly 1.3B plus another healthy 1.5B of thermal coal, MEE offers a plethora of valuable assets to potential suitors, Considering the combination of management under attack and valuable assets, its no surprise that the acquisition news is heating up.

Over the weekend, the WSJ leaked news that ArcelorMittal (MT) had been reviewing a bid for MEE for months now. MT as a suitor seems like the most credible news to be leaked so far. Not only would they more easily swallow MEE with their $52B market cap, but they are likely desperate to lock in met coal supplies at reasonable rates. As commodities like met coal become less and less of commodities, only fully integrated steel producers will survive and prosper. How can they compete if their input costs continue to soar?

Not to mention that Stone Fox Capital is a big holder of ANR stock as well so a big bid from a large steel producer would not only benefit our MEE investment since the stock hit $30, but it would also push up ANR.  So heres to a bid from MT! Not that MEE really needs a bid as they will eventually resolve the regulation scrutiny and find ways to profitably mine the massive met coal assets. Ultimately though a nice premium lets us cash out of one coal play to reduce our exposure while making some nice gains.

The BOD is supposedly scheduled to meet over the weekend so I'd expect the stock to move up on speculation. We're not huge fans of speculating on mergers, but MEE is a special situation considering the mine explosion and the strategic assets. It really appears that the only question is price. The BOD is clearly under pressure by large institutional shareholders to sell. Weekend should be interesting to follow. As the Caterpillar (CAT) buyout of Bucyrus (BUCY) shows the deals typically happen where the market isn't focused. Don't buy this stock expecting a buyout. Could easily get burned was what the market expects typically doesn't happen. 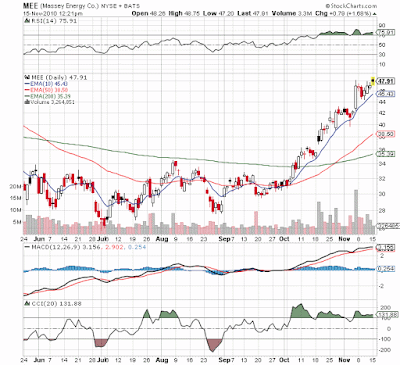