Shopify (SHOP) has done everything to deserve dropping off an analysts Best Ideas list. The company recently sold shares in a secondary offering and has a new CFO, but the prime reason to avoid the stock now is a completely different reason.

Ironically, Wedbush dished Shopify due to the analyst leaving the firm, but the move was timely. In February, the company sold 4.8 million shares at $137 to raise over $650 million. As well, Shopify has a new CFO starting April 2. Not a very good combination. CFOs rarely leave such a strong story.

The biggest issue though is that the company is a modern day Ebay (EBAY) trading at a ridiculous valuation. Shopify now trades at 3.5x the forward P/S multiple of Ebay. 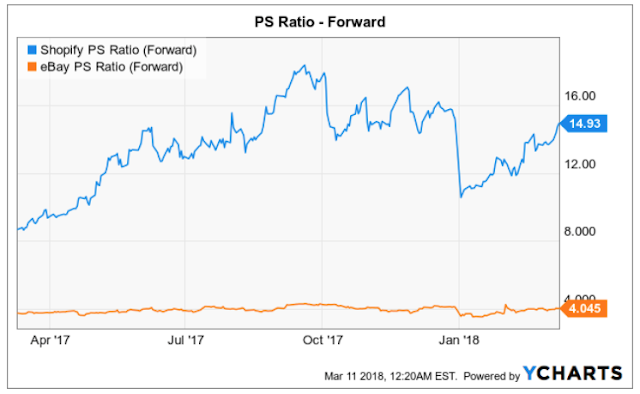 As the 70%+ growth rate in 2017 turns into 35% in 2019, the multiple will contract leaving limited upside for shareholders despite the fast growth.

Recommending a stock trading at these levels with a market cap approaching $15 billion is impossible.

Anonymous said…
That's silly to even hint that Shopify is somehow dependent on Facebook; therefore, Shopify will lose out as a result of FB issue? Geez.....
I will not sell my Shopify stock!
Does Citron have something against Shopify??? Why the bad publicity?
March 26, 2018 at 3:43 PM

Anonymous said…
I believe Shopify is a sinking ship coming from both a merchant and an app developer. At first they were honestly amazing in terms of support and the offering.

Much like every other tech company nowadays, all that changed as they grew and got closer to an ipo.

From an app developer, at first the policy was to only approve new apps that performed a unique function (a.k.a prevented direct copies of other apps), they did a complete 180. Now you have a Google play store of sorts where there are 10 versions of every popular app and the developers are not making enough to provide quality support or develop new features.

Also they now require every payment to be made via Shopify so they can claim there 20% off the top. Was a tough pill to swallow losing 20% gross off my revenue. Ended up selling the app, and moving on from Shopify.

From a merchant POV, the customer service is all about gone, instead of logical solutions you get the typical run around.

A clear trend with growing tech companies as they shift the focus from quality service to simply growing a user base.
November 16, 2019 at 1:03 AM