By Mark Holder - November 25, 2012
When Document Security Systems, Inc (DSS) announced plans to merge with Lexington Technology Group, Inc (LTG), the company signaled a shift in business plans to focusing on monetizing IP assets. With DSS in the process of a lawsuit against Coupons.com over misappropriated trade secrets and breached confidentiality agreements, the merger with a manager of IP assets appears to provide benefits to both shareholder grou ps.

With the LTG merger, the company plans on becoming a dominant patent monetization company with the goal of being the Blackstone Group LP (BX) of the sector.

Below are the highlights from the Q3 earnings report:
The relatively low revenue totals highlight how the company hasn't previously been successful at monetizing assets. The technology appears to be widely used by governments around the world yet the company has been unable to obtain payments for the technology.

Back on October 2nd, the company announced the merger with LTG that will effectively place the management team from Lexington in charge of the operations. The planned new CEO, Jeff Ronaldi, and CIO, Peter Hardigan, have extensive experience in the monetization of patents from previous work at Turtle Bay Technologies and IP Navigation Group (IPNav), respectively.

The combination of the companies provides a solid base of IP assets with the extensive patents held by DSS combined with the LTG patents recently acquired from Bascom Research. The assets provide not only the ability to expand markets, but they also provide a platform for adding patent portfolios in the future.

A primary reason for selecting a merger with DSS is that LTG needs an operating company to not only demand injunctions and lost profits, but also to provide access to the public markets if the company needs to raise capital in the future for patent deals. A non-operating, non-public entity lacks the necessary structure needed to build the patent monetization platform.

While most of the focus on the merger has been on the IP assets of LTG, DSS has significant IP assets in the security printing and cloud security services areas recently estimated with a present value of $245M by ipCapital Group.

That amount doesn't even include the ongoing lawsuit against Coupons.com for breaching confidentiality of printable technology shared with the firm on a trial basis back in 2006. The company thinks Coupons.com has placed that technology on billions of internet generated coupons during this time period. A licensing agreement or positive verdict could amount to millions of dollars in royalties.

Along with more than 50 patents, DSS has a solid technology base for the future management team to implement the patent monetization platform.

The claims are based on patents filed by Tom Bascom of Bascom Research that provide for the basic data structure of sharing and storing objects via social networks.

Those Facebook revenue estimates are unlikely to be met in future years. The company is unlikely to grow revenues by 33% each year for the next 5 years. Regardless, it will have a substantial revenue base and a massive user base of over 1B people that could generate substantial fees for LTG. In fact, LTG would prefer royalties based on incremental users rather than revenue.

Besides the size of Facebook, LinkedIn has a 2013 revenue base forecast to hit $1.4B. Also, analysts forecast Jive to hit $150M in revenue for 2013 with 35% revenue growth. The combined revenue estimates for those three firms hits nearly $8B in 2013. Using the 1.5% license rate suggested by John, the fees would amount to $12OM.

In addition to the lawsuits, the company has initiated a licensing program via IPNav in order to obtain license fees from hundreds of other companies utilizing the technology created by Mr. Bascom. The potential is significant considering a majority of these companies are still in the early growth phase.

The company has bigger plans than capitalizing on the existing IP assets of the merged entity. The new DSS wants to establish a platform for acquiring patent assets where the company forms a partnership model with acquired patent holders, thereby reducing the risk via spreading the wealth across the platform.

In a way, the idea is similar to how biotech firms look for multiple drugs so that the company is not dependent on the FDA ruling on one drug. Conversely, DSS doesn't want to be dependent on one patent portfolio or one lawsuit.

The ultimate goal is to obtain 5 to 7 IP portfolios that will allow for a constant flow of patent claims from the early and mid stage to the verdict or royalty collection stage. Again the process would be similar to the different phases of the drug approval process to reduce the risk of one failure.

Starting with the two existing portfolios via patents from Bascom Research and DSS, the company hopes to add a couple portfolios by the end of 2013 dependent on opportunities in the market. Once a successful platform is proven, the company might be able to attract top patent assets to participate in the rewards of a proven concept.

The platform also includes the building of the management team with significant experience in patent monetization. Not only does the company now have an experienced CEO and CIO, but also the board will include Warren Hurwitz that is very experienced in enforcing and protecting the rights of IP assets via this firm, Altitude Capital Partners. Also, the former CEO of LTG, Will Rosellini, will remain on as an advisor. Will previously worked as a scientific advisor for IPNav.

One of the biggest concerns with the combined entity will be the ability to monetize these assets based on the limited assets currently on the books.

A part of the merger announcement, the company finalized a private placement for $2.7M. Considering the $10B cash hoard of Facebook, the company faces a steep challenge with limited resources compared to the defendants.

LTG is expected to have anywhere from $7-10M in cash at the time of the merger that will provide enough capital to complete the initial litigation process. Don't forget that any litigation costs remain with LTG until the merger is complete so the DSS cash level isn't important to that business at this point.

The stock remains at 52-week lows due to the weakness with the general micro cap stocks. Not to mention the recent turnover of executives isn't going to help investor confidence.

The stock has had little to no reaction since the announcement of the merger agreement with LTG. Surprisingly the news of the potential license revenue has had no impact on the stock. For any investor with limited patent knowledge or the inability to derive the likely outcomes of the lawsuits, the current price action is concerning. The market must expect a major capital raise or some other materially negative event for the stock to remain this low. Possibly the market just doesn't grasp the potential yet, though the support at $2.50 suggests the stock might be finally bouncing off the bottom.

Based on the VirnetX Holding Corp (VHC) stock results, the market reaction on DSS has been surprising. Investors might not be aware of the stock and the potential yet. In fact, after an initial bump in the daily volume, trading has dried up to less than 100k shares per day. Another hot patent stock, Vringo, Inc. (VRNG), has averaged over 8M shares traded on a daily basis.

Another example of the relative obscurity of DSS is that only 285 investors subscribe to article alerts on Seeking Alpha. VirnetX has over 2,100 subscribers and Vringo tops the group with more than 4,700 subscribers. Clearly a group of investors interested in technology patent stocks has yet to discover DSS.

For investors not aware, VirnetX traded for less than $2.50 at the end of 2009. After huge gains in 2010, the stock shot from $12.50 to $40 in a few months in 2011 based on the expectations of a solid outcome on a patent suit with Google (GOOG). The stock has been very volatile lately due to disappointment over the recent Google award of only $30M and the large verdict against Apple (AAPL).


Interestingly, VirnetX trades at a $1.6B market value or nearly 10x the expected merged value of DSS. Could DSS eventually see major stock gains from the expectations of a large royalty?

Based on the recent stock weakness, investors might want to place this stock on the watch list for now. Based on the chart below, VirnetX had a consistently upward movement prior to its significant jumps in August 2011 and March 2012. 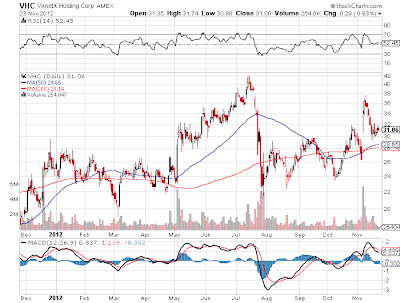 The company has incredible potential for creating a patent monetization platform rivaled by none. Until the market realizes the potential or some positive outcome jolts the market into realizing this potential, investors might be disappointed with a stock stuck in a trading range.

In reality, until the merger finalizes in early 2013, DSS doesn't have the Facebook lawsuit or the experienced IP monetization management from LTG on its team yet. Maybe this significant fact is holding back the stock. Regardless, current investors in DSS get access to an IP portfolio that exceeds the current valuation of the stock and a breakeven technology business. The risks appear low while the rewards could be substantial. Investors should stay alert for when the market realizes the potential of this stock.