By Mark Holder - March 10, 2012
Anybody half way following the market this year has to know that Sears Holdings (SHLD) has had a tremendous run this stock. The stock is up over 150% for the year, leading the S&P 500. Oddly though according to the Bloomberg report on Sears remains 2nd in the list of highest short percentage.

The data is only as of Feb 29th so maybe a few shorts covered during last weeks rally.

Another important point is that Bloomberg lists the equity float as 36 million shares. This number could be considerably lower when adding a few mutual funds that control shares unlikely to be sold to the public.

It's possible that most stocks have similar fund holdings so at least the comparison is likely apples to apples giving a great starting point for more research.

From the list below, Sears has an incredible 34% of the float short. This continues to highlight my theory that the large purchase by Chairman Eddie Lampert and the subsequent aggressive moves on monetizing assets has set off the Impossible to Cover theory. 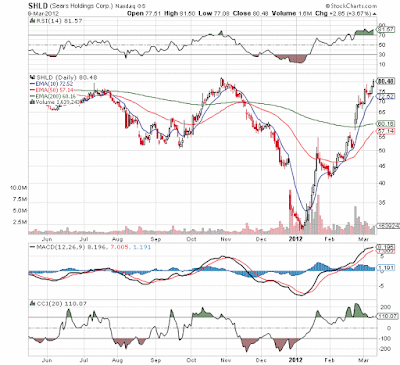