By Mark Holder - February 15, 2012
The announcement that People Express might return as the new PeoplExpress Airlines further highlights why the airline business is just too competitive. With American Airlines recently filing for bankruptcy, why in the world would another investment group jump into the frying pan?

For anybody like me that wasn't familiar with the original People Express, it was a leading lost cost carrier from the '80s that at one time was the #5 airline in the US. Excerpts on the history from Wikipedia:

People Express Airlines, stylized as PEOPLExpress, also known as People Express Travel, was a U.S. no-frills airline that operated from 1981 to 1987, when it merged into Continental Airlines. The airline's headquarters was in the North Terminal of Newark International Airport in Newark, New Jersey.

In 1985 People Express bought out Denver-based Frontier Airlines. The combined company became the United States' fifth largest airline, with flights to most major U.S. cities, as well as a transatlantic route to Brussels. During this period, People Express also purchased midwest commuter carrier Britt Airways and Provincetown-Boston Airlines (PBA), a regional airline with route networks in New England and Florida.

In the end, People Express was forced to sell entirely to Texas Air Corporation for roughly $125 million in cash, notes, and assumed debt. Due to concerns about regulatory approval for the purchase, Texas Air purchased the assets of Frontier from People Express in a separate transaction worth $176 million. People Express ceased to exist as a carrier on February 1, 1987, when its operations were merged into the operations of Continental Airlines, another Texas Air subsidiary, under a joint marketing agreement.

Reading the Wikipedia report sure screams don't invest to me. It doesn't sound like a concept to resurrect.

According to a Fox News report, the new version expects to obtain 7 to 10 Boeing planes in order to operate in mostly underserved markets on the East Coast. Though it apparently still needs to raise more funds.

Honestly don't understand the rush into investing in airlines. It might be true that a underserved market exists, but that won't prevent competition from joining into the fight. Or a stronger American Airlines out of bankruptcy might engage in a pricing war. Either way, the only winner will be the airplane lessors like Aercap Holdings (AER) or Air Lease Corp (AL). 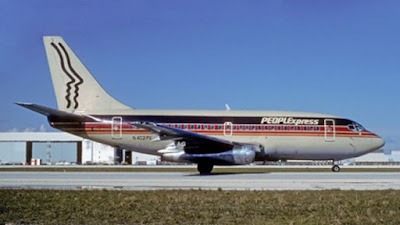