By Mark Holder - February 07, 2012
Following on the report from Lincoln Financial (LNC), Hartford Financial (HIG) reported solid earnings of $.69 that beat estimates by $.07. More importantly though Hartford reported the book value jumped to $47.25, up 17% on the year.

2011 was a difficult year for Hartford with record cat weather related losses. Yet the company still reported earnings of $1.94 for the year.

More importantly the company was able to repurchase 3.2 million shares at $15.93 per share in Q4'11. It has already bought another 2.6 million shares in Q1'12 at $16.58 per share. Not only were these purchases at roughly 35% of book value, but so far they were done at prices lower than the current market price of $19. With a $400M authorization left, management should've bought all they could in Q4.

Per the chart below the stock is in breakout territory. A move above the 200ema and the October high around $20 would quickly usher in a move back to the July highs around $26. Incredible considering this only gets the stock back to 50% of what the book value is likely to hit at the end of 2012. 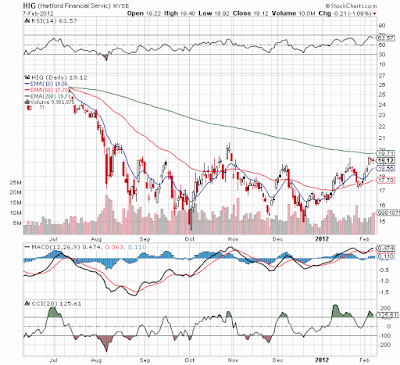