By Mark Holder - October 12, 2011
Sears Holdings (SHLD) is up nearly 8% today due to the strong market and probably the positive comps news from WalMart (WMT). So far nobody is giving Stone Fox Capital credit for this jump like a few weeks back. Back then Barron's blog and others specifically suggested this Seeking Alpha article led to the huge gains in SHLD. Guess our 15 minutes of fame are up already.

Incredibly SHLD has nearly closed the gap from the July highs. The stock mostly traded in the $75 range that month, but it did have a spike to $80. Currently trading around $72.75 puts it just a few bucks below that $75 resistance level.

This theory of comparing a stock to the July highs is going to be a theme of ours for the rest of the year. Based on recent economic news, it is becoming more and more apparent that most if not all the drop since July 1st was pure panic about a financial crisis that isn't going to happen. In addition, China had a major reversal in its markets (more on that in another post) last night suggesting that the hard landing fear might be over as the government comes in to support the markets now.

SHLD broke above the 200ema today signaling future gains. As mentioned in the article, SHLD remains an attractive investment as they continue to monetize brands and lease real estate. This might just be the start though expect some pullbacks as the CCI reaches an extended 200 and the RSI hits 70. 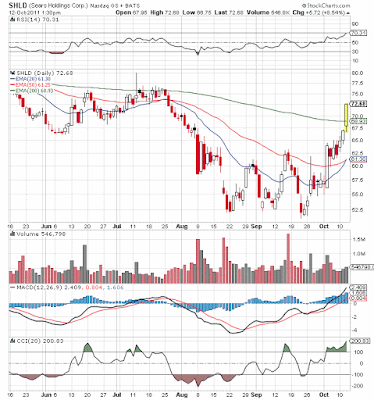