By Mark Holder - October 12, 2011
For months now, the weakness in the Chinese stock market has hampered any recovery in US. The fears of a hard landing in China added on top of a EU blowup has just been too much for the markets.

After a week long holiday, Mondays' lame action in the Shanghai Composite was seen as very disappointing. Investors were hoping that the major reversal in the US markets last Tuesday would lead to a major rally, but instead nothing happened. Then, Tuesday was very volatile. Finally on Wednesday, the Shanghai started up down and then had a strong rally. The bullish engulfing pattern is typically a very bullish reversal.

Tonight will be telling as even positive market action would be the first positive confirmation since July when the market traded above the 10ema. The CPI numbers come out Thursday night and that will definitely move the markets. Inflation has been the biggest fear with China. The August numbers cooled down and September should follow as commodity prices imploded during the month.

Below is a chart showing the last 8 months on the Shanghai Composite. It peaked 600 points higher or 25% from here back in April. Many stocks owned in our models benefit from China growth so a big reversal in this market would be huge. 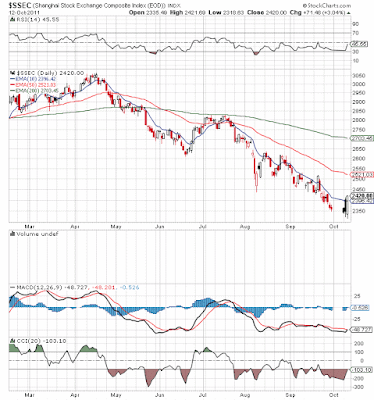