By Mark Holder - May 16, 2011
At least thats the opinion of Jim O'Neil, chairman of Goldman Sachs Asset Management, of BRIC fame. He appears to be a lot more bullish on China and other emerging markets like Russia, Turkey, Indonesia, and Mexico then the general market.

Inflation has been a huge concern in China for what appears like two years now considering the China stock market has been flat since mid 2009. China originally led the rally off the bottom during the financial crisis so its very plausible that China might be set up for the next leg up. The economy has been growing at 10% per year and the market is virtually flat. That doesn't compute.

Tidbits from the Bloomberg interview or just watch the clip below:


Chart of the Shanghai Composite over the last 3 years. The market has been flat for 2 years now which is likely a big surprise to most market followers. The market has recently held and bounced off the 200ma that is now slopping upwards. Some clearly bullish signs if it can break above recent overhead resistance in 3,100 range. 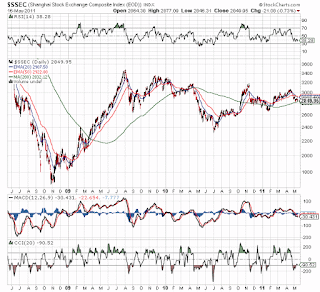