By Mark Holder - April 19, 2011
As we've written on ChinaCache International (CCIH) in the past, this Chinese internet company has been completely ignored by the market. While Sina.com (SINA) has soared and numerous other IPOs have garnered attention, the market had forgotten about CCIH.

Volume for two days in early April were below 50,000 shares. An absurdly low amount for a hot internet sector. Even the 3 month average volume being only 183K shares. For example, Youku.com averages nearly 2M daily shares and Qihoo 360 Technology (QIHU) averages 5.7M. The difference is very surprising considering the growth rate at CCIH.

Today CCIH had 1.2M shares traded which is the highest volume on a up day since the IPO. It is also the 2nd highest day after the 1.5M shares traded on Feb 9th after the announcement of the COO resignation.

China internet stocks were hot today, but it appears the key to share gains in CCIH is for it to regain attention as China internet IPO versus a reverse takeover (RTO). Somehow CCIH had slipped down to where it appeared that investors were considering them in a skeptical light while bidding up all the big name stocks.

Hopefully the volume today signifies a change in direction. If anything, CCIH should be a huge benificiary of the internet boom in China. Numerous companies have raised significant amounts of funds to expand operations and they'll all need the CDN services offered by them. 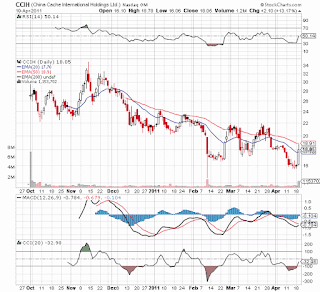