Evidently Everybody Fears China Inflation Except For China Stock Market

By Mark Holder - April 15, 2011
Last night, China reported inflation numbers for March that were slightly hotter then expected at 5.4% and at a 32 month high. Naturally the market tanked. Or wait, the Shanghai Stock Market was up slightly yesterday after initially falling. On top that, the market is up at breakout levels after having recently broken above a double top at 3,000.

So why didn't the market tank overnight? Partially because China has been busy fighting inflation by raising interest rates and reserve requirements for banks. Mainly though because most analysts view inflation closer to peaking. The monetary restrictions combined with a weak market in 2010 leaves China an ideal place to invest in 2011.

One of the biggest issues with inflation hawks is that they tend to not let interest rate/reserve changes work their way through the economy. It takes up to 9 months for rate increases to work through the system yet hawks will jump all over this hot inflation number as a reason for more immediate moves. If we've learned anything from the boom, bust cycle in the US during the 2000s is that drastic changes in interest rates have little immediate impact, but eventually it contributes to a dramatic change in economic course.

The US is now benefitting from extremely low rates, but watch out a few years from now after the FED raises rates by 300-400 basis points if not more. Eventually they'll raise rates one too many times and the economy will come to a halt. 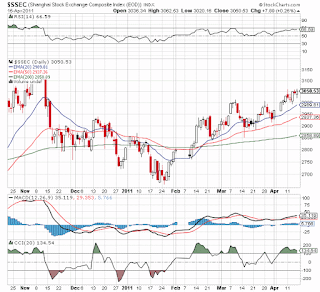