By Mark Holder - July 22, 2010
It appears that the downtrend started on April 26th has finally been broken. Our at least for the moment because lately the market could just as easily whipsaw back down this afternoon. Bullish earnings reports from CAT, T, UPS, and others helped pushed the focus back to earnings and away from the rehashed story that Bernanke told yesterday. The key that most people seem to be missing is that corporate profits are based on what's going on in China, Southeast Asia, and South America as much as the US. So the economy can remain weak, but that doesn't mean that profits will follow the US. Stocks remain extremely undervalued because of the focus on valuing the market based on US weakness.

As of 12:20cst, the market has actually broken above the 200ema which would be extremely bullish. Lately though it hasn't been able to hold these bullish levels so we'll need a good close and a positive follow through.

Looking at the chart a close above 1088 breaks the downtrend and of course most people see 1100 as the strong resistance. Naturally any break above that level would bring along a ton of technical traders. 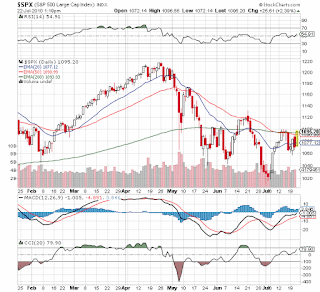