By Mark Holder - April 29, 2010
Ciovacco Capital Management has been working on an index to predict the sustainability of bull markets or the BMSI. Basically the goal of all investors is to determine when to let your winners run and when to dump stocks. Any of these indexes are generally based on the concepts of the Leading Economic Indicators that we harp on so much. For example, the spread in the short and long term interest rates is a huge indicator of future economic growth. That indicator flat lines and people should flee stocks.

Not sure they've posted all of the 30 leading market indicators included in the study, but its interesting to note that it still flashes an extremely bullish case. Basically the same numbers as back in late 2004 before the market made its run over the next few years from 1,150 to 1,550.

As usual such indicators are always designed with the numbers that would've predicted the past corrections and booms. Sometimes though they aren't that great at predicting the future. Changes in how people invest such as via ETFs or comm odities versus individual stocks can skew numbers. Greater access to options and futures can also skew numbers down the road.

All in all though, these indicators can be very useful for guiding long term investment decisions. Is the market up too much? Leading indicators don't suggest so. In fact, most of them suggest the returns have just started. It always helps to review such indicators when all the headlines are so negative with such things as Goldman Sachs being sued by the SEC and the Soverign Debt crisis. Most people would flee stocks if they don't have a strong base of what really matters. The most important decision the past 2 weeks is that the Fed will keep short term rates at near zero allowing the yield curve to remain extremely bullish. That always trumps the headlines.

For now stay long and if you don't believe me check out the BMSI. 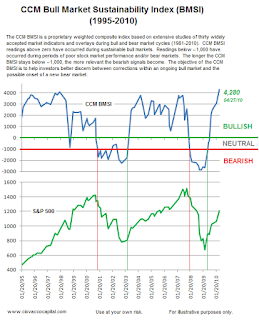