By Mark Holder - April 08, 2010
If you follow the market at all, you've probably heard numerous stories about this market being overbought or overextended. Bespoke had good stats a couple days back about the historical nature of this run since 1990. True it's one of the longest streaks so that does cause some concern, but at the same time this recent market and the Great Recession have been historical so why wouldn't this rally?

During the 1994 and 1995 rally the market had 2 stretches of roughly 70 days where the market didn't have a pullback of 1%. It would not shock me at all to see that record broken. It also wouldn't shock me to see a 2% pullback tomorrow. For the record to break, we're looking at 5 more weeks without a big selloff. Seems absurd, but do you really want to bet against it? Most people seem to expect a selloff even when history provides evidence that these abnormal scenarios tend to always happen after recessions.

The facts from the below report suggest that we are in fact due for multiple such rallies. After the early '90s recession, the market had 6 such rallies. After the 2001 recession, the market had at least 2 rallies in 2004 that can be tied to the recession and even a couple of follow ups in 2006 and 2007. If anything, instead of fighting this rally people should be looking for more to the tune of at least 1 if not 2, 3, 4, or even 5. So many people expect a selloff which greatly increases the odds that we won't have one. 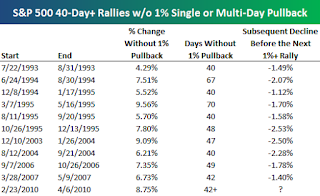