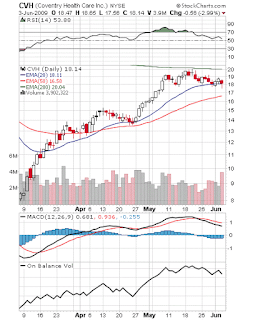 Sold Coventry Health (CVH) shortly after the open and not long after the Aetna warning. Aetna is in the similar health insurance sector and warned of much weaker results. Based on this and the not so promising future for health insurance due to pressures from Obama Administration I'm not bullish on the sector. We originally bought CVH based on cheap PEs and the desire for exposure to the healthcare sector with the market still in crisis. Unfortunately, we should've pulled the trigger at $20 close to the 200EMA. Luckily though we got out with a nice gain around $18. This sector is still cheap so we'll look to re-enter if the market gets hit hard.

Edit 6/4: CVH initially rebounded yesterday making us wonder if the sell was prudent. Maybe Aetna wasn't that applicable to CVHs results. Maybe it'll hold the moving average after all. Well today, CVH sold off on a up 1% day and closed below the 20EMA at $18.10. This was a very bearish move and validates our sell. It's funny how the market will sometimes give you plenty of time to exit a bad position, but if you don't take advantage of it you will eventually regret it. Sometimes it just take the big Hedge and Mutual Funds days and weeks to exit positions. Now this might still turn around tomorrow and close back above the 20EMA leaving some hope. With Obama, the risk for now appears on the downside. This is an appealing name so we'll likely venture back as we already see the stock as cheap, but the market doesn't so we'll stay away for now.
CVH Trade