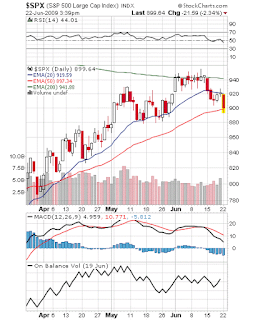 Unfortunately our portfolios weren't set up for an oversold condition in the market, but when the indicies drop 2.5% because the World Bank declares that the world GDP will be worse then they expected back in March you know the market has reached near term lows. More likely the market just wanted to take the path of least resistance down to the 50EMA around 897. Moving below 900 scares alot of people but it typically means nothing. Just about anybody following the market knows that the world economies have stabilized dramatically since March so any group claiming worse numbers now is because their system is using lagging indicators for prediction. Most leading indicators are up dramatically.

Just over a week ago, we were looking for a breakout on the SP500 above the 940 range to signal a opportunity to make a bullish run to the 1,200 level. Well that didn't happen and looking back it probably isn't that surprising that the market took this chance to retest some levels and 'hopefully' suck in the shorts. Many an expect has been clamoring for a huge selloff and this likely will pull them more into the fray. We see this as a buying opportunity. If anything the news of late continues to be more bullish. The Leading Indicators came in at 1.2% and is now up over the last 6 months. The Beaish case just doesn't add up. The market being up 30% isn't that great of an argument. I remember the claims last year that the market should be bought because it was down 30%. Well, we all know that those loses doubled in a hearbeat to 60%. The reverse could be true this time.

Now is the time to execute some trades from your buy list assuming the market doesn't break the 50EMA.

NOTE: The last 30 minutes of trading were brutal with the market falling to a greater then 3% loss. Guess we shouldn't be overly surprising as the market tends to take out technical levels in order to leave traders in a quandry of what to do. Tomorrows action will be telling as today's move had nothing to do with the news flow. Or if it did, the market will easily rally as the news from the World Bank was a huge head fake. Global growth stocks were sold big time today and they should be bought on weakness. Global growth is the key to all future growth, not the US or Western Europe.
Market Review SP500