Missing the Bottom on Anadigics 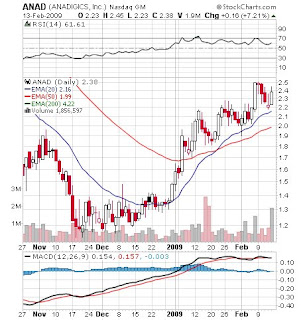 Having watched the market fall apart the last 16 months, it's no surprise that a small cap tech stock like Anadigics (ANAD) has been hit hard. The amount of the fall might be surprising though considering they have an impressive balance sheet. So many professionals scream on CNBC all day that they want to invest in companies that don't need cash yet stocks like ANAD and another favorite of Stone Fox Capital, Alvarion (ALVR), have fallen to levels that equal cash. Basically the remaining company was valued as worthless.

As survivors of the tech bust in 2000, you'd think investors would give these companies a greater benefit of the doubt. Much more willing to look beyond the current climate and realize that they will be survivors. Times may be bad, but with their balance sheet they'll clearly survive and maybe thrive when we come out of this as the competition might be greatly reduced with the weak competitors not surviving. Recessions aren't always bad if a company can garner market share.


Though the numbers seem bad the stock got down into the $1s making this stock trade for an Enterprise Value in the $0 range. Unfortunately we missed that bottom, but it currently looks very tasty at $2.38. From a technical standpoint the stock is bouncing along above the 20 day ema and a nice rising 50 day ema. The earnings report on the 26th will be volatile so be careful, but the valuation and technicals on ANAD are very appealing.
ALVR ANAD Anadigics

Mark Holder said…
ANAD quickly drops to the 50day ema in this weak market. Potentially a good place to add with a tight stop.
February 19, 2009 at 11:33 AM