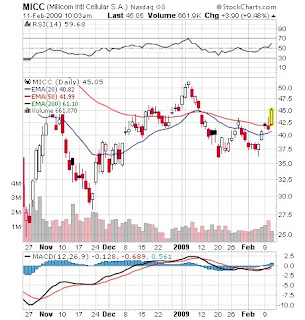 Even with the horrible economic environment and a stronger dollar impacting their foriegn operations, Millicom (MICC) continues to post strong growth. Having mobile operations in Latin America, Asia, and Africa does help as the economic malaise isn't as impacting in those countries and the demand for wireless to improve productiviy and provide for basic communications will continue growing.

For those willing to look you can still find companies posting 18% revenue growth and 31% EBITDA growth even in this environment. So why is the stock price down 66%? Good question! The results would suggest that the stock would be trading at all time highs. From a technical perspective, MICC looks like it could be breaking out to the upside as its bounced nicely above the 50 ema. We recently purchased more stock in the funds and personal accounts. Looks like good timing considering the 8% rise after the results this AM.