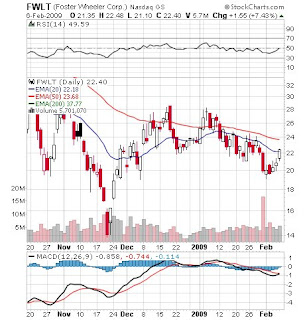 Or at least thats the word from Dow Jones. Iraq is the process of increasing production of oil to over 6M barrells per day from roughly 1.5M barrells. The complete project is expected to cost over $5B and take several years to complete. This could be one of the mega projects that the FWLT CEO continues to talk about to anybody that will listen. Unfortunately most people in the market have been unwilling to listen to him. Demand for these mega projects that take 3-4 years to complete just isn't eroding. FWLT is a huge buy at these levels and based on the continued strong order flow and backlog. Makes me wonder why the stock even sold off in the beginning.

Of DOW JONES NEWSWIRES AMMAN (Dow Jones)--Foster Wheeler Ltd. (FWLT) and two other international firms have won contracts to boost Iraq's export capacity from its southern oil terminals on the Persian Gulf, an Iraqi Oil Industry source in Basra said Thursday. U.S.-based Foster Wheeler was awarded a front end engineering and design contract for the project, he said. A U.K. company and one from the United Arab Emirates, which he didn't name, were awarded contracts to lift mines and sunken ships from the Iraqi waters in the Gulf and carry out a survey of the seabed to build new underwater pipelines, he said. He gave no details about the cost of these three deals, but he said they were worth millions of dollars and signed late last year. The three contractors are expected to start work this year, he said but he didn't specify when. As part of the project, the ministry and the South Oil Co. will award more contracts to international companies to set up four new loading berths in the Gulf, lay three underwater pipelines to replace the old and eroding ones and build large crude oil onshore reservoirs, he said. "The total cost of the project would be no less than $5 billion and it would take three to five years to complete," the source told Dow Jones Newswires by telephone from Basra. The project would quadruple Iraq's export capacity from its southern terminals, he said. Iraq's two terminals in the south, Basra and Khor al-Amya, could handle up to 1.6 million barrels a day of the country's crude oil exports. Iraq is currently exporting the bulk of its crude oil from southern terminals, selling around 1.5 million-1.6 million barrels a day. Last October, the U.S. State Department said that aging underwater pipelines, which link storage facilities near Basra to offshore tanker fueling terminals, are in such poor condition they could rupture at any time and need of back-up or repair. The source said the old underwater pipelines would be used as a back-up for the new three pipelines which would be laid. Boosting capacities of southern export terminal is needed to cope with an increase of production the country is planning to achieve in the next few years, the source said. The country is planning to boost its crude oil production, particularly from southern oil fields, to around 6 million barrels a day in five to six years time from 2.4 million barrels a day now. Iraq recently embarked on its first and second oil licensing rounds and hopes to have part of the contracts signed by June 2009, and rest by the end of the year. -By Hassan Hafidh, Dow Jones Newswires; + 962 799 831 831; hassan.hafidh@dowjones.com