Stat of the Day: Money Market Assets at Record Levels 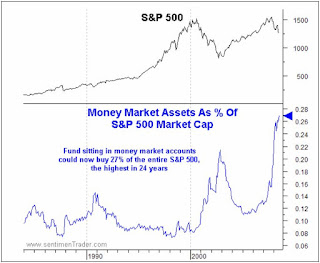 As of last week according to http://www.sentimentrader.com/, money market assets alone would amount to 27% of the value of the S&P500. This almost doubles the last housing crisis in the early '90s of 14%. It's also considerablely higher then the 22% reached after 9/11. In fact, after yesterdays historic drop we're likely over 30% now. All of these assets will have to leave the bomb shelter at some point.