Albert Pujols: Why You Don't Sign A 32-Year Old To A Mega Contract

By Mark Holder - June 04, 2017
As everybody celebrates that Albert Pujols joined the 600 home run club, the real news is the ultimate failure of the Los Angeles Angels during his tenure with that team. 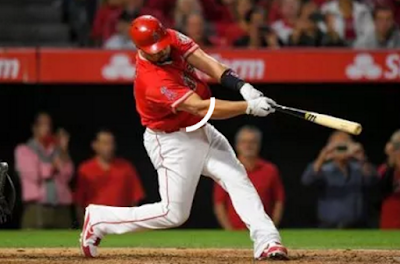 Back before the 2012 season, LAA signed Pujols to a mega 10-year, $240 million contract based on his massive success in St. Louis. He led the Cardinals to 3 World Series appearances, winning both in 2006 and 2011.

His stats were phenomenal during that time period. Pujols was nearly a .330 hitter in STL and regularly led the league in key offensive categories like SLG and OPS due to his high batting average and power numbers.

The constantly overlooked stat for sluggers is the amount of runs scored versus the RBIs. In the case of Pujols, his runs scored were nearly equal to RBIs while a Cardinal. Back in 2003, he scored 137 runs and batted in 124 runs. 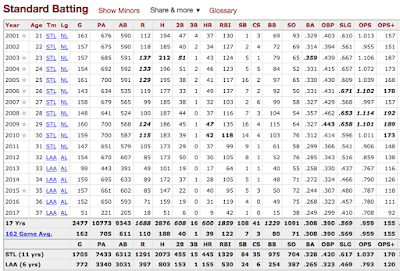 Since turning 32 and becoming an Angel, his numbers have all collapsed with some glimpses of the power numbers. Pujols is only averaging .265 while in Los Angeles and consequently isn't scoring many runs.

During 2016, Pujols hit 31 home runs and drove in 119 runs, but the celebrated home run hitter only scored 71 runs. In essence, he only scored 40 times when not hitting a home run. This year, Albert has only scored nine runs while not hitting the ball over the fence.

The massive collapse in most offensive categories shouldn't surprise anybody considering he turned 32 while transitioning teams and leagues. The most amazing part is how his numbers immediately tanked and never recovered.

Pujols has never hit .300 in LA and has never topped scoring 90 runs after regularly topping 110 runs scored in STL. His OBP is nearly 100 points lower. The question really has to be whether age caught up with him or money made him soft.

The Cardinals didn't have much success after 2006 until the 2011 season, or the year before free agency. If anything, that year was a sign of the future for Pujols with his average dipping below .300 for the first time. The key though was that he crushed the ball in the playoffs leading his team to a second title.

The Angels came along and agreed to a massive, long-term deal. Pujols is making a reported $26 million this year and has four more years of massive pay where the aging slugger will turn 40. During his tenure in Anaheim, the Angels have only made the playoffs once and have yet to win a playoff game, much less a series.

The playoff failures are despite Mike Trout developing into a MVP without a large salary until this year. Though, the Angels regularly overpaid for other aging stars such as Josh Hamilton and C.J. Wilson during this time period. In those cases similar to Pujols, some initial success left the team with large salaries for players in their mid-30s.

So while everybody celebrates Albert joining the 600 home run club, don't be surprised if most Angels fans head into depression. The team must pay millions each year to him while having little to no talent outside of Trout. Paying mega contracts to again superstars just doesn't pay off for the team.