For existing investors and those seeking a new patent stock, Document Security Systems, Inc (DSS) offers a potential homerun opportunity. The previous article, Document Security Systems Has Significant Patent Monetization Plans, offered a glimpse at the potential in the stock. The real key for the stock will be the execution of those plans.
DSS is a leading developer and integrator of cloud computing data security, Radio Frequency Identification (RFID) systems and security printing technologies that prevent counterfeiting and brand fraud.
With the stock lingering around 52-week lows around $2.70, investors still have the opportunity to purchase the stock below the merger and private placements levels. That price won’t last over the next few weeks and months if the company starts executing on target dates whether with the patent cases or the merger.
Catalysts
The company has several major catalysts that could push the stock up starting with the Motion to Transfer for the Bascom Research patent case on December 7th through to the merger with Lexington Technology Group (LTG) that is expected to close in March.

The biggest issue with investors in DSS remains that the Bascom Research litigation against Facebook (FB), LinkedIn (LNKD), and the others starts prior to when the merger with LTG will be finalized. Could any significant progress in the case jeopardize the merger?

Other potential catalysts include the Coupons.com trademark lawsuit and the IPNav license program. Naturally the Coupons.com lawsuit is of prime focus considering it revolves around technology already owned by DSS and not dependent on a merger. While the IPNav license program could provide a significant royalty stream assuming the success of the Bascom Research case. 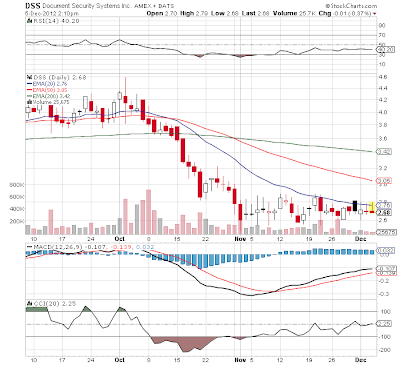 While the stock has held support at the $2.50 level, the lack of a bounce actually suggests the stock could go lower. With patent stocks having exceptional years, the weakness in the stock is extremely confusing. The inability of the stock to move above the 20ema is very concerning.
Conclusion
Any investor looking for a huge risk/reward event might want to purchase DSS prior to the transfer motion hearing on Friday. While not dictating the ultimate case, a positive outcome that leaves the case in the Eastern District of Virginia might finally ignite some interest in the stock.

Over the last week, the stock has averaged an incredibly low 50,000 shares traded a day. This limited market action suggests a stock with limited catalysts, which couldn’t be farther from reality. With a positive outcome on Friday finally kicking off the action in this stock, investors might finally jump into it.