By Mark Holder - July 28, 2012
Not many people probably realize this, but the S&P 500 is approaching the yearly highs and the post recovery highs. Back at the end of April the market peaked out around 1,420 and sold off down to 1,270. Amazingly though considering the turmoil still going on in Europe and the weakness in China, the market rallied to 1,386 on Friday. Placing it just a small rally away from those highs. See the chart below: 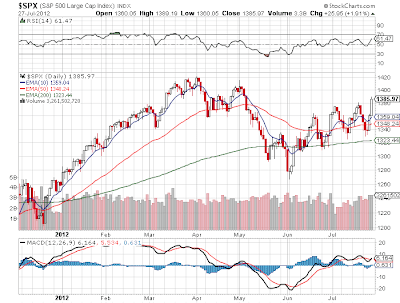 Note the higher highs and lower lows over the last two months very much indicating a breakout.

The small cap Russell 2000 has not had the same outcome. While not too far behind the large caps, the smaller cap index still remains below the July peak at 820 and further behind the end of March top around 850. 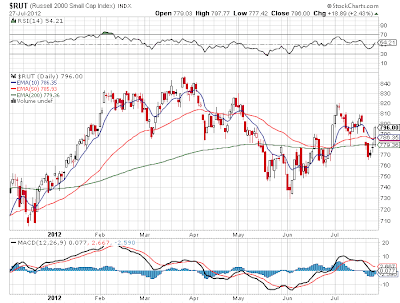 The main reason for the outperformance of the S&P 500 remains the popularity of dividend paying stocks that are more common in that index. As investors become more comfortable with the stock market and its ability to shake away from European turmoil the expectations would be that the Russell 2000 stocks will make a strong run.