By Mark Holder - July 22, 2011
Schlumberger (SLB) reported growing international demand (finally!) this morning on the Q2 earnings report suggesting that Weatherford (WFT) will have good results as well. Naturally WFT isn't as good of an operator as SLB so it could still surprise the market.

WFT gets over 60% of its revenue from outside the US so it only benefits to a minor degree on the huge increase in US land drilling. It has also had problems this year with accounting issues and hence the stock price was recently approaching 52 week lows while big brother SLB and Haliburton (HAL) hit highs.

Interesting to see bullish comments about deepwater markets, Egypt, and Bahrain. Also, noteworthy is that oil producers are ramping up production in other areas to make up for the lost production in Libya.

All the news points to significant gains by WFT if they can turn it around. Looking at the charts below, it has a lot of catching up to get back to where SLB has gone this year. 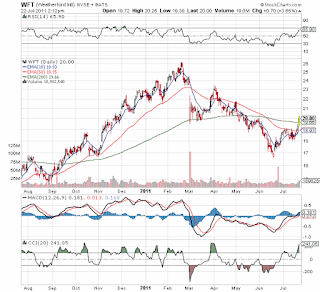 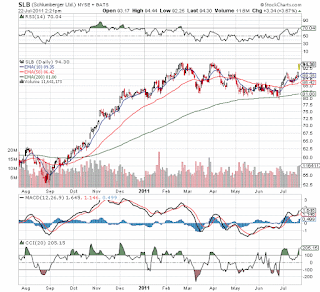