By Mark Holder - July 29, 2011
Incredible negative action in Manitowoc (MTW) after earnings Tuesday night. The stock dropped from $16 on Monday to $13 around the opening on Friday. Of course, the market was very weak contributing to the drop, but it was amazing to see the level of selloff in this particular stock.

MTW is a leading crane maker and competes with Terex (TEX) among other companies. What really amazes this investor is that TEX had recently reported strong sales and weak profits leading any skilled investor to know the playbook for MTW. In fact, MTW actually reported stronger cranes numbers than TEX making any serious investor dizzy seeing MTW plummet.

Luckily Stone Fox Capital unloaded MTW in the $15.8x range last Friday noting the stock was technically falling apart. Not to mention it had a gap around $14 in the charts suggesting the stock might fall substantially. Unfortunately we weren't able to return to the position in the low $13s this morning. The stock will be on are radar next week though.

MTW reported earnings of $.16 compared to estimates of $.18. Revenues were solid and the book to bill was 1.1 in the crane division. All very good numbers considering the weakness in the sector. This was the highest earnings total in a while and showed substantial improvement from last year. Sometimes the market gets too hung up on estimates and not the facts. Honestly, has the stock deserved a nearly 40% cut since April with earnings coming in $.02 shy?

Oh, and don't forget that management didn't adjust 2011 goals. Maybe they are being too aggressive, but no sign exists that the cranes market has already peaked. If anything, MTW and TEX are both struggling with a forecasting issue and not a growth issue. MTW lost $.10 in Q1 and made $.16 in Q2. Investors should focus more on the improvement and not the relative performance compared to estimates.


Anybody should be careful picking a bottom, but todays action was very constructive. 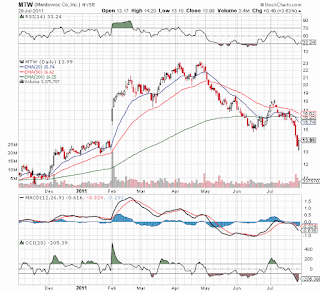 Disclosure: Long TEX and might purchase MTW within the next 3 trading days. Please review the disclaimer page.
Cranes MTW TEX