By Mark Holder - February 26, 2010
According to this report from Bespoke Investment Group, Sears Holdings (SHLD) tops the list with Eastman Kodak (EK) and AIG as the most disliked stocks by the analyst community. Pretty impressive company to be in the same group as AIG. The contrarian in me suggests that this makes SHLD an excellent investment at these levels.

SHLD reported nearly $4 in earnings per share in 2009. Considering how horrible the retail environment was last year, its likely that SHLD will report even better numbers in 2010. Even lowly chain KMart has now turned around its fortunes and actually posted positive comps in Q4. Trading at nearly $100 the PE might seem high at nearly 25 on a trailing basis, but as has been documented numerous times on my website and via other reports SHLD has several assets that aren't properly reflected on its balance sheet such as its real estate. Its worth a lot more just earnings alone.

All in all, its strange that only 3 out of 500 stocks in the SP500 have a 50% sell ratio. For a market to work you've got sellers and buyers for each transaction meaning that the typical sell ratio should be 50%. Heck, it only takes 25% sells to make this list meaning SHLD is clearly isolated and hated for reasons beyond the market in general. We think its very misunderstood and hence continues to be a great buy. 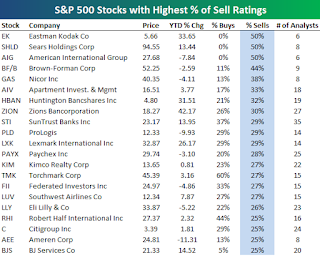