By Mark Holder - February 06, 2010
After the SP500 touched just below the 200EMA at 1046, Stone Fox Capital used the roughly 7% cash we had accoummulated from selling US Steel (X) a few weeks back to become fully invested. The portfolio has only $4500 left in cash so we'll likely look to trim a few positions on a solid bounce in the market next week. A huge oversold market (at one point down 4.7% in less then 2 days) creates a great entry point for adding to positions.

Added to our positions in some extremely oversold stocks such as Foster Wheeler (FWLT), Terex (TEX), Puda Coal (PUDA), Phoenix Companies (PNX), and to a couple of stocks still in strong positions Local.com (LOCM) and Terremark Worldwide (TMRK). Most of these stocks will likely bounce the hightest, but if they stall at key technical levels on the way up that will trigger selling these purchases. Some charts like FWLT, TEX, and PNX are clearly broken. They all have 14 day RSI sub 30 and CCIs in the -160 range. For example, TEX has been down 14 of the last 16 days. Clearly due for at least an oversold bounce. If we're lucky the market will come to its senses that growth in China isn't going to slow down especially when it comes to building. Or the issues with Greece and Portugal will get resolved this weekend. More on that subject latter.

SP500 had an incredible reversal off an extremely oversold position. For it to end up positive was very bullish. Its not likely to move below Friday's close for the next week or so. Most likely it'll work up towards the 20EMA which is now around 1100. If it can't break through that level, then we might see further weakness later this month. If it does work through it, then we're headed towards a retest of the highs around 1150 and this was simply a shakeout of weak hands. The earnings reports for Q4 and guidance for Q1 have been so strong that the fundamentals will hopefully start shinning through to the stock price. 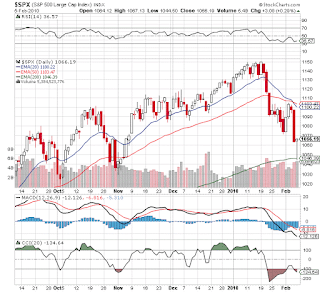 TEX chart: notice the constant red candles and the RSI and CCI numbers. Always signs of a extreme condition that leads to a reversal. 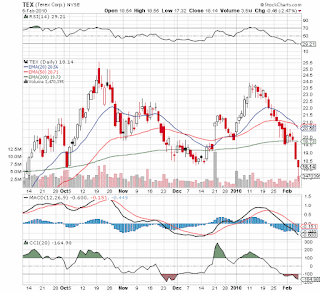