By Mark Holder - February 17, 2010
After a gut wrenching drop that had the SP500 near correction levels, it made a huge bounce off the 200EMA. Now today, 7 trading days later that market has reclaimed the 20EMA after taking back the 50EMA. This is very bullish action and any bounce off it the rest of the week should be bought aggressively.

The chart clearly looks like it wants to at least retest the 1150 high from mid January and we're still positioning for a push to the levels reached right before the Lehman collapse last year around 1200-1250.

Even though the market couldn't break above 1100 with a close just shy of that 'magical' number, it doesn't really provide any real resistance similar to how it was easily broken on the way down. 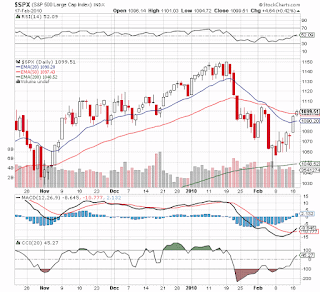