By Mark Holder - December 01, 2009
Several months ago Stone Fox Capital suggested that the market could 'Melt Up' in a scenario similar to how it melted down last year. During the span of a few weeks the market quickly dropped from above 1,200 to below 900. When this happens either on the way up or on the way down, it leaves very little resistance when the market revisits those levels in the opposite direction.

The market has been stuck around 1,100 for several weeks now so its likely to either move quickly higher to the 1,200+ level or finally have that 10%+ correction that everybody on Wall St wants. The below chart from Ciovacco Capital highlights that potential. It seems unlikely that this surge off the bottom will end in a whimper but rather a blow off top with money rushing in from the sidelines. Since we've highlighted that such huge rallies off a bottom after a major market decline never end at year end and usually last more then a year, it seems unlikely that a correction is pending. The more likely scenario is the sudden 'Melt Up' that would lead to the Fed unwinding liquidity finally leading to a market correction.

Until the data suggests otherwise, our model portfolios are fully invested. 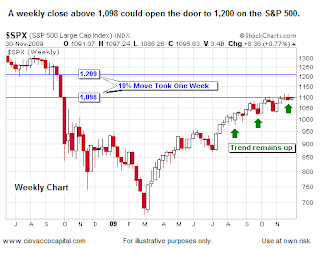