Stat of the Day: Off the Charts Yield Curve 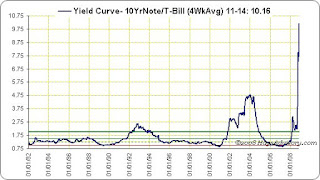 Another indication of the whackiness in this market. The yield curve is now off the charts bullish. This usually has a very positive impact on future bank earnings, but in a market where lending is limited its difficult to determine if the impact will be like normal cycles. Typically banks are encouraged to lend like crazy because the spread is so positive for them, but that isn't happening this time because of the financial crisis. You can bet though at some point in the future, this yield curve will help return the market to growth and inflation. In fact, its likely to cause irrational investments as it always does at the peaks and troughs.

This number is off the charts because of the huge compression in the rates of the T-bill. Its unlike anything the market as seen even in the last 25 years. Anytime this ratio gets above 2 it becomes very bullish for the future economy. The markets tend to forget that in periods of extreme bullishness or negativity that such monetary realities will cause a dramatic shift in the future economies direction.
Yield Curve