Aurora Cannabis: No Thanks To Ontario!

By Mark Holder - December 19, 2019
Ontario finally plans to allow new cannabis retail stores, but the 2020 target is far below industry hopes.
Cannabis 2.0 rollout appears disappointing in part due to lack of Ontario retail stores until mid-2020.
The $3 billion stock price remains expensive with capital needs while facing more industry delays.
Just when the Canadian cannabis sector appeared headed towards a couple of major catalysts in 2020, the sector has again been sabotaged by the governments inability to license new stores or break the illegal market. My investment thesis was looking for a chance to turn bullish on Aurora Cannabis (ACB), but the company remains in a tough financial situation until catalysts kick in later into 2020.
Read the full article on Seeking Alpha.
Update - December 23, 2019
Not surprising with all of the Cannabis 2.0 delays, Aurora Cannabis hit a new low today. The stock needs to test the sub-$2 range and once coming out the other side, ACB could become a buy. 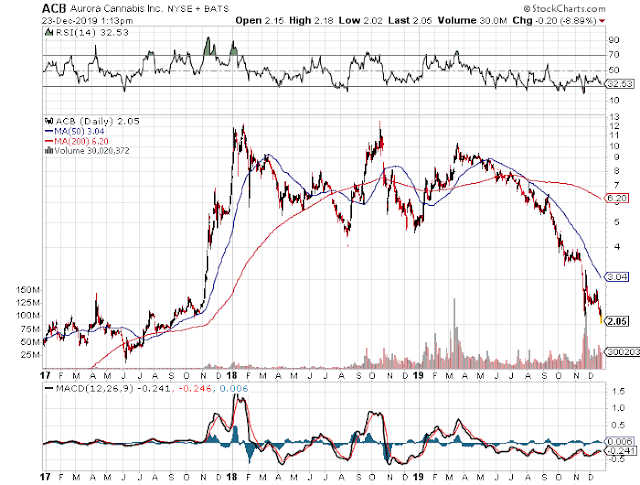 The business has to resolve funding issues and survive until the catalysts of Cannabis 2.0 and new Ontario stores kicks into full gear mid-2020. Avoid Aurora Cannabis until possibly the end of Q1.

Update - December 22, 2019
Now the Alberta government has suspended vape sales. With Quebec and a couple of small provinces already blocking vapes, the Cannabis 2.0 catalyst for Canadian LPs has all but faded now.

When combined with the lack of Ontario stores, vapes are only accessible to consumers in a small fraction of the country with BC being the only major province offering ready access to vapes.

Update - December 20, 2019
Global expansion continues to take major hits. First, Germany has halted sales of medical cannabis and now Italy continues to push the local producer to ramp production to eliminate imports from Aurora Cannabis. Our thesis has held steady that all international locations will eventually push cultivation to a local company and eliminate the global expansion plans of the Canadian LPs.

-The Italian Ministry of Health plans to almost triple the quantity of medical marijuana to be produced domestically in the coming year.

aaronnssd said…
Nice article, which you have shared here about the Cannabis. Your article is very informative and useful to know more about the Canadian Dispensaries. Thanks for sharing this article here.
April 4, 2020 at 4:53 PM

imlanguages said…
I read this article; it is really informative one. Your way of writing and making things clear is very impressive. It was awesome article to read. Complete rich content and fully informative. Thanking you for such an informative article. Buy Sativa Online Canada.
August 15, 2020 at 10:25 AM