Disney: The Problems At ESPN

By Mark Holder - October 30, 2016
Based on Nielsen's November estimates, ESPN owned by Disney (DIS) is collapsing faster than expected. The networks of ESPN, ESPN2, and ESPNU all lost over 600K subscribers for November alone. 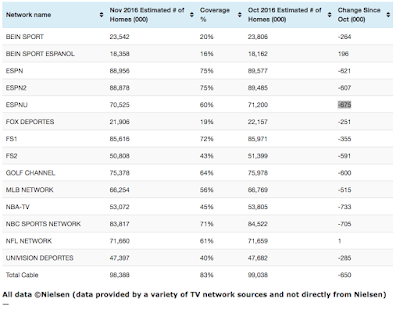 Expect Disney to trade weak next week as this next speeds up the cord cutting desire to avoid the high costs of ESPN at the same time that the cable sports network spent billions on rights fees for events like MNF from the NFL. The stock down below $95 had not accounted for this many people cutting the cord so quickly.

The news as well question why AT&T (T) would buy Time Warner (TWX) for a premium after buying DirecTV when the prime reasons for the purchases were the sports rights deals with the NFL and NBA.

Seeking Alpha
Can Disney Afford These Deals?
AT&T: Glimpse At The Realities Of Another Deal
Disney: ESPN Still Has A Big Problem