MGT Capital: Had To End Bad

By Mark Holder - May 18, 2016
As I posted on WhoTrades yesterday, the tweets of MGT Capital's (MGT) new CEO John McAfee assured the market that the soaring stock wasn't a pump and dump. The odd part is that the tweets from the legendary CEO only played into the stock pump. The stock traded up to $5.58 today for an incredible surge from only $0.25 in April. 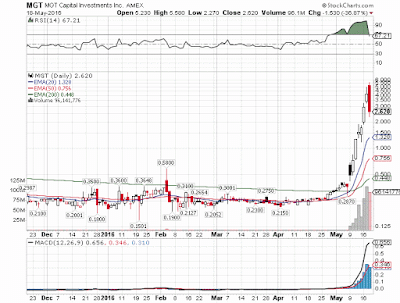 Despite his past success with McAfee in the cybersecurity space, he is now 70 years old and technically running for president as well. His D-Vasive company that focuses on anti-spy software doesn't appear to have much in sales. The deal involved MGT paying D-Vasive 23.8 million shares and $300,000 in stock. The deal was for 47% of the company making the stock valuation over $275 million at the peak today.

A big key is that McAfee was willing to accept less than 50% of the MGT stock for his company for a value of below $10 million at the time of the deal. Even at the close, MGT has no business trading for a valuation of around $132 million.

McAfee might not be involved in a pump and dump, but the stock will still end bad for people that bought this pump.