By Mark Holder - December 23, 2013
With so much negative news surrounding emerging markets and the strong gains in the US market, it is interesting to see India slowly climb to multi-year highs. In the last couple of months, the Bombay Sensex Index has climbed over 21,000. The index originally reached over 20,000 in December 2007. Since that point it has gone virtually nowhere. See the chart below: 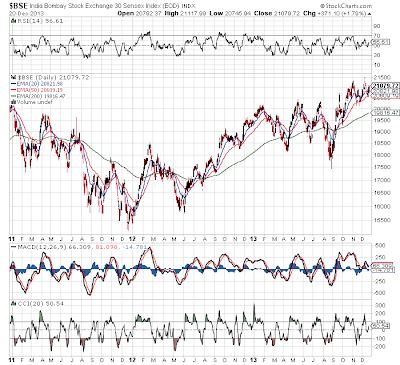 The best that I can tell the index actually reached an all-time high after spending the last six years consolidating. India appears set for a major breakout and maybe the best stock to play that move in the US would be ICICI Bank (IBN). The major Indian bank with a market cap in excess of $20B actually hit a peak of over $70 back in early 2008. The stock has lost 50% of its value during those nearly 6 years (sounds like the NASDAQ bubble from 2000). It might be a good stock to own in 2014.