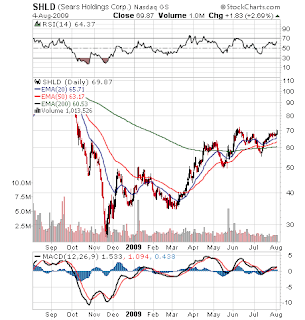 Sears Holdings (SHLD) looks poised to breakout. Once above $70, the next stop is likely $100. Now the market seems do for a pullback according to most analysts and media outlets, but not much of that happened when the market fell off the cliff last fall.

Also, ignore all the nonsense about SHLD as a company. They have a ton of assets not fairly valued in the current market. SHLD can easily surpass old highs.

Dicks Sporting Goods (DKS) has a similar chart and setup. Any move above the current close at $20 solidifies a breakout that has some resistance around $24, but mostly opens up the stock to a move back to $30.

Both moves net close to the same game so pick your stock. Most people favor DKS for its better run operation, but SHLD likely has more upside as the economy recovers.