Article originally published to Out Fox members back on Oct. 5.

Sample research from Out Fox The Street:

For a long time, Aphria was been a favorite amongst the Canadian cannabis LPs due to a cheaper valuation and stronger execution. Back on Sept. 24, the stock was highlighted as a better Canadian cannabis pick than Aurora Cannabis (OTC:ACB) when Aphria traded at $4.31.

Aphria has gotten a big boost today with Cantor Fitzgerald hiking the price target by C$2.50 to C$15.50. The amount equates to $11.68 for a stock trading at only $4.41 before the market opened today.

Some key points of the bullish call for the quarter ending August:

A big key to the quarterly results is the expectation of Aphria generating C$16.3 million in adjusted EBITDA. EBITDA will nearly double from the FQ4'20 level and provide for the first quarter of meaningful EBITDA by a Canadian cannabis LP.

The stock has a listed market cap of only $1.4 billion now despite having a Canadian cannabis business reaching C$70 million in the past quarter on top of the distribution business in Germany. Aphria has potential international growth opportunities and will benefit from further growth in Canada with additional retail stores and the rollout of more Cannabis 2.0 products.

The latest reports on the advertising market showed the power of the social media space during the downturn. While the rest of the U.S. advertising segments saw Q2 ad revenues decline by at least 30%, Facebook only saw a 10% dip in the quarter. 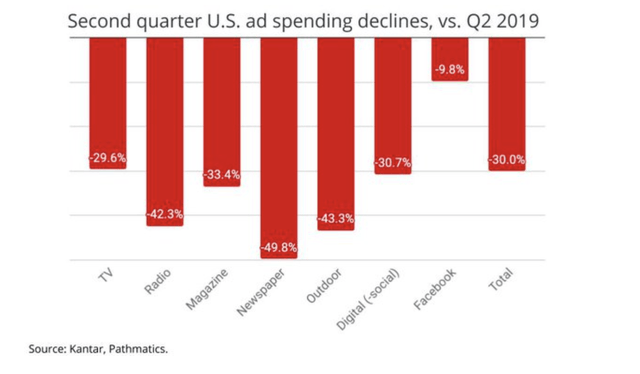 The research report had incomplete data on Twitter and we already know that the social media site has a lot of failures in this area, but the data continues to support Twitter playing in the correct market. Ultimately, the company will benefit from the site growth and the ability of social media to grab more and more market share. Even better, Twitter has the ability to start working on subscriptions to expand their revenue base beyond just solely advertising where Facebook and other tech giants are dominating the space.

The stock remains an easy bargain compared to Snap (SNAP) and Pinterest (PINS) despite having similar, if not better growth metrics. 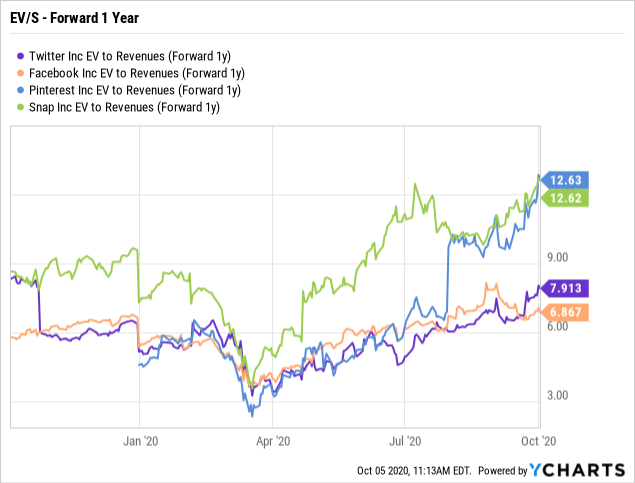 If Twitter traded at a 12.6x EV/S multiple, the stock would hit around all-time highs of $70. My base case isn't for the stock to reach such a lofty multiple, but for the stock to rally based on revenues far exceeding the current estimates for only $4.06 billion in 2021. Twitter should easily top 24% revenue growth next year.

The Out Fox model remains heavily invested in Twitter.

If you'd like to learn more about how to best position yourself in under valued stocks mispriced by the market, consider joining Out Fox The Street.