By Mark Holder - September 23, 2016
Twitter (TWTR) is soaring 20% today on news today that the company is in informal discussions regarding a sale of the business. According to the news, Alphabet (GOOG) and salesforce.com (CRM) are looking at a bid for the social media giant. 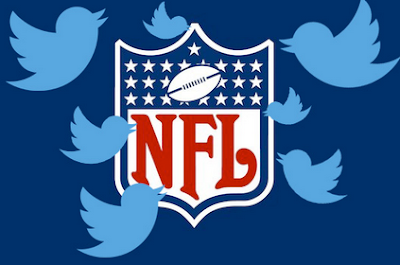 The big question is whether a Twitter shareholder even wants a deal. After the gains the stock has a market value of $15.7 billion. A decent value for the current revenue base, but the potential remains massive. What if the NFL streaming deal and the host of shows lining up for the site starts expanding the user base.

Facebook (FB) now has a market value of over $370 billion. Maybe it isn't possible to ever reach that level, but one could argue that these streaming deals with the likes of 120 Sports and Cheddar provide a compelling case for users to return to the service. If Twitter can really show that 800 million people view the site, than Twitter actually has half the user base of Facebook and no where near half the market valuation.

So while I have big questions about the benefits of a deal, one has to question whether Salesforce or Alphabet will even make a decent bid. Salesforce is worth $50 billion and any deal for $20 billion would be a lot for the company. Also, the synergies of a social media site with livesteaming as the future seems questionable with a business that manages customer relations. Besides, the stock is down 5.5% on the day suggesting the investor base doesn't want to merge with Twitter.

"While Twitter is involved in the customer service process, we don't believe it is necessary for Salesforce to own Twitter to be able to use it as a medium for customer service.... Our response, if CRM were to buy TWTR, would be negative. Twitter is profitable and while back of the envelope the deal might not be dilutive, we believe it would fuel concerns that CRM is de-focusing on the "customer" area in a quest to stretch for growth."

Alphabet makes a lot of sense, but merging with Google will surely face huge regulatory hurdles. The combination of 2 of the largest digital advertising platforms has to be a huge problem, especially in Europe where the company is already under big time scrutiny for monopolistic moves.

The important note is that any deal is still in the preliminary stages and a shareholder in Twitter definitely doesn't want anything at this level with the stock only now crossing $20. One should definitely look for a dip back to the 200ema below $20 for a buying opportunity. 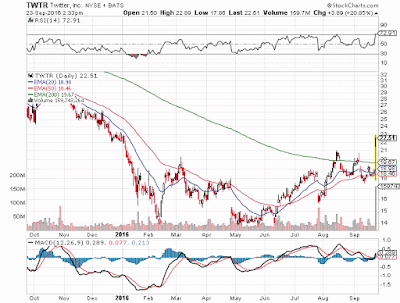