By Mark Holder - January 18, 2011
So much for the government debt issue in Europe keeping the Germans down. Earlier this morning, Germany reported a huge jump in investor sentiment. The index jumped over 15 and was much better then the expected 6.8 points.

Though expectations for exports are slightly weaker in 2011, the private sector is expected to grow nicely. In reality, a jump in investor sentiment shouldn't be that surprising with the DAX jumping all the way back to 2008 highs. The market is booming yet analysts estimates still appear constrained and out of tune with the facts.

Whats amazing is that the US markets such as the SP500 remain nearly 300 points below its all time high back in October 2007. Will the US eventually catch up? 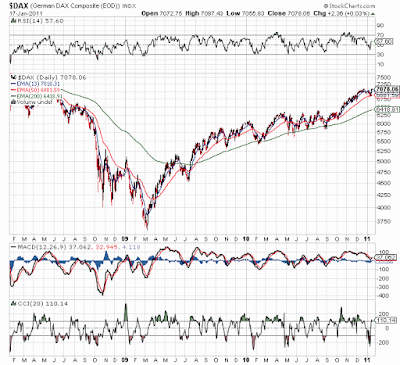